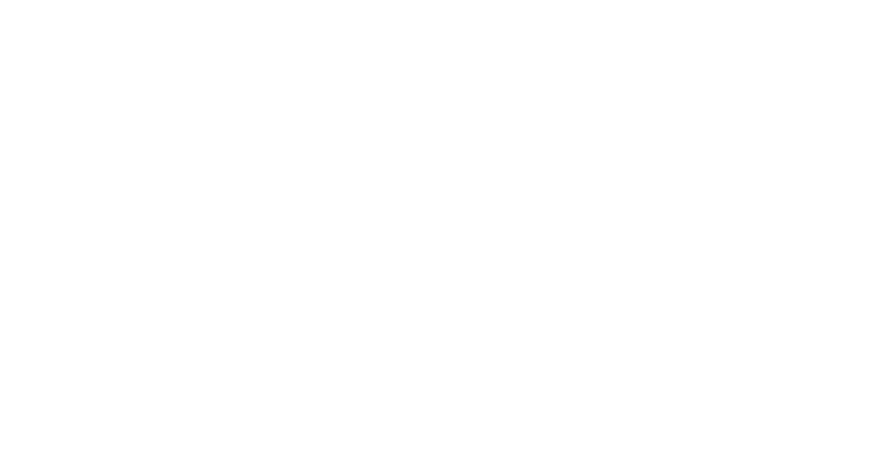 A few years ago Solar Thermal panels were all the rage, heat your water for free from the sun. So why have they all but disappeared from the renewables scene?

The reason is a bit of an underground hit, so unfamiliar are these devices the industry still hasn’t settled on a name for them.  Some call them immersion diverters, some call them immersion optimisers and they also get referred to by trade names like Eddi, iBoost or Immersun.  Whatever they’re called they probably give the quickest payback of anything on the energy saving and renewables market.

Installing one is straight forward and can take less than an hour for any competent electrician.  If you can change a socket you’re probably able to fit an immersion diverter (of course, always follow the instructions and consult a pro if you’re not sure).  They cost between £250 and £500 depending which model you go for, which compared to a Solar Thermal system that starts in the thousands is the first reason they’re much more popular.

They work by monitoring how much electric you’re sending back to the grid and diverting that amount of electric in to your immersion heater.  So they only ever use the electric that you weren’t using anyway.  Therefore it’s free!  But how effective are they?  We had 4kWp of PV fitted and we had one of the old copper hot water cylinders with an immersion heater in the top, like many houses used to have, and from my conversations with customers it’s evident many still do.  In the first year we saw that once we’d turned the heating off in the spring our gas meter did not move until we turned the heating on again in the Autumn.  Now our son was 2 at the time so had a bath every night and we also had 2 teenagers in the house with sporadic showering habits, sometimes 3 a day, sometimes 3 a month.  Then there’s my wife and I, we do shower daily, and not together I might add.  So I guess we had average hot water usage.  We were also impressed with the effectiveness of the immersion diverter (in our case an iBoost) in the winter.  I checked our iBoost on a Saturday morning in January, it was 10:30am and we already had a full tank of hot water…. And that’s when it happened.  You see it may sound great that we’ve got a full tank of hot water, but being a Solar PV owner you realise that this means you’re spending the rest of the day sending electric back to the grid.  So we decided on a change.

We had our hot water cylinder replaced with a thermal store.  Up until this point the central heating radiators were heated directly from the boiler, so were unable to take advantage of the free heat from the iBoost.  Installing a thermal store meant that we could also send the free hot water to the radiators to heat the house.  Now I thought that this might contribute a bit to the heating but that the heat would disappear out of the tank really quickly when the heating came on.  Not so, we have some smart home monitoring on the tank temperatures and much to our surprise and delight we found that if the water was at full temperature when the Solar stopped generating in the evening then we had enough hot water in the tank to do our heating and hot water right through to the next day.  You can see the tank temp in the picture below, the iBoost has heated the tank up to nearly 78 degrees and our gas boiler is set to come on at 55 degrees at the end of the day, so it only kicks in if the iBoost didn’t get enough sun.  You’ll also notice that the iBoost hasn’t started to heat the water until after midday.  That’s because we have a Powerwall and that normally takes most of the morning to fill up on a good day in the winter.   So with the Powerwall battery and the iBoost we still have some ‘off grid’ days in the winter. 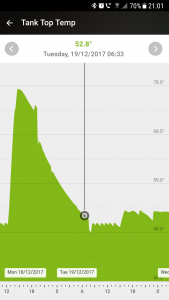 So apart from price, why is the immersion diverter more popular than Solar Thermal?  Well there’s also the maintenance issue, Solar Thermal has moving parts and glycol liquid in the system, which means maintenance requirements which can be a couple of hundred pounds a year.  Solar PV systems will also last longer, mainly again to the ‘no moving parts’ issue.  A high quality Solar PV system can be expected to last for 40 years plus, whereas Solar Thermal is unlikely to last 20 years.  Solar PV is also more useful, when Solar Thermal has heated your water, there’s nothing else it can do as opposed to Solar PV, the electric can be used for other purposes, making more use of your roof space.

I’m not saying that Solar Thermal doesn’t have it’s place in our renewable future.  If you’ve installed the largest Solar PV installation that you can and you’ve still got space on your roof then a Solar Thermal system could add to your free energy mix.  They’re also useful for swimming pools, as heating a swimming pool takes a vast amount of energy so you’re going to want to get everything you can going to keep your bills down.  But with all the reasons I’ve outlined here, it’s clear to see why so many customers with PV stopped coming to us for Solar Thermal when the clever people at Immersun bought the first immersion diverter to the British market. 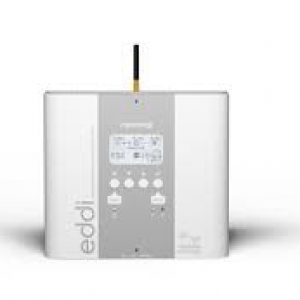 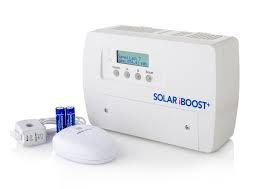 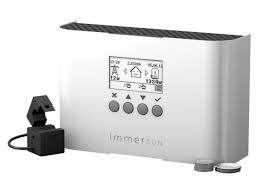