All Day & All of the Night

Naked Solar recently completed an install in North Devon of 15 Sunpower Maxeon 370w panels, SolarEdge inverter, and a Tesla Powerwall battery with backup. Our customer’s aim was to be as energy neutral as possible. We guided him through his options, showing comparisons and projections using our PV Sol software. He decided to go for the highest performing combination of panels and battery available because, despite the higher price, it represented the best value by far in the long run.

His current set up is predicted to generate at least 6000 kWhs of energy per year. He will see how the system performs this winter before deciding whether to add another Powerwall 2 to his array.

Here’s his story in his own words…

Given the times we live in, it was always my intention to move away from fossil fuels where possible. So when I moved into my North Devon property in December 2018, getting as much of my energy as possible from renewables  was the first thing I wanted to address. I’d already done my research and felt that coupling solar panels with a battery storage system was the best way to maximise my usage of any solar electricity generation. I’d also spent months researching ground and air source heat pumps, and was forced down the air source route due to space limitations at my property. I knew that both solutions would increase my electricity usage but that only confirmed my decision to go for solar and storage.

To maximise my investment, I ended up choosing the best solar panels available at the time, and decided on the Tesla Powerwall 2 as the storage system. At the time of writing, it’s simply the best solar storage solution out there, giving you a fantastic 13.5 kWh maximum storage capacity. This means you can run a 1kW device for 13.5 hours, purely from a full battery charge with no other influences.

Once my solar panels were installed I had an array which could generate up to 5.44kWp (kilowatt potential – i.e. max potential output). Bear in mind that, for safety reasons, you’re limited by law to a maximum generation of 3.68 kW at any given point. You can only increase this with special permission, unlikely to be given to a typical household. So, the reason for getting as large an array as possible is to try to ensure you achieve that 3.68kW limit as often as possible. Think cloudy day, for example.

I was very pleased with Naked’s solar installation but one problem still remained. Most of my power was generated in the day, whereas my main usage was in the morning and evening. I had to wait for my battery due to supply issues with Tesla but the enforced wait only demonstrated how the combination of the two would be far superior to solar only.

Since the battery installation, I have truly reaped the benefits of the integrated system. So far, during the spring and summer months I’ve been effectively energy neutral. My house runs off the solar during the day, and the battery during the mornings and evenings. To achieve this, you still have to be slightly careful as the Tesla battery has a maximum output of 5kW (with a temporary peak of 7kW) so if you run a lot of high-demand appliances at once you may still draw power from the grid. Typically though, the combination of solar and Tesla battery is ample and the Tesla iPhone app lets you keep an eye on your usage. You soon discover what your high power usage items are!

So presently (August 2019) I have free electricity all day long and that means free hot water too from my air source heat pump (goodbye gas fired boiler!). The system more than copes with the demand.

I do realise that in the winter months I won’t be energy neutral as my heat pump will be providing both my hot water and heating, but this was always the expectation and the reason why I had an economy 7 meter installed. My Tesla will be set (using the iPhone app) to fully charge up during the night on the night rate electricity, and then will discharge during the day to run the heat pump and my appliances, with the solar providing as much energy as it can during the grey winter months. Regardless, my worst case winter scenario is running my house during the day on the night rate electricity rates! 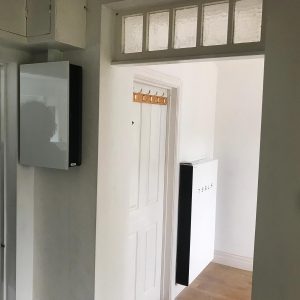 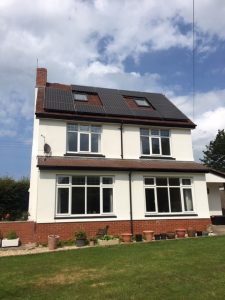